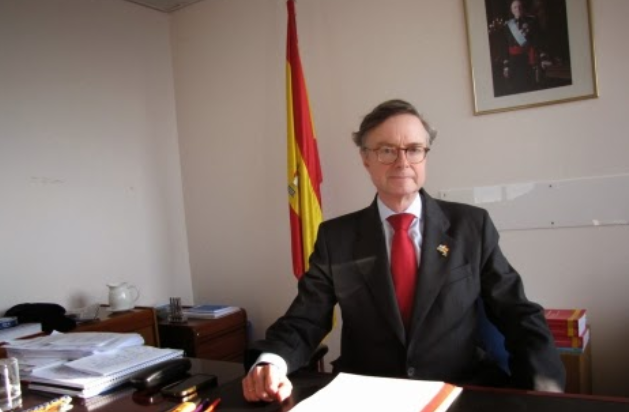 Fundamentally Freund: From Gaza to Catalonia: Europe’s insufferable hypocrisy
By MICHAEL FREUND
11/10/2014
Perhaps it is time for someone to pull Mogherini aside and whisper into her ear: before you start offering unsolicited advice to Israel, you might want to get your own hypocritical house in order.

This past Saturday, European Union foreign policy chief Federica Mogherini set a world record for diplomatic duplicity and haste. Barely seven days after assuming her new post, the former Italian foreign minister rushed to pay a visit to Gaza and Ramallah, where she managed to call for the division of Jerusalem, denounce housing construction for Jews in Judea and Samaria, and insist on the establishment of a Palestinian state.

Mustering up all the moral bluster that European diplomats are so fond of, she did not hesitate to lecture Israel, as if she knew better than the Jewish state what its own national interests might be. Dead Syrians may be littering the streets of Aleppo while Islamic State is busy beheading Kurds and Christians in Iraq, and Saudi women might be struggling to be allowed to drive cars, but Mogherini appears to have a one-track mind when it comes to the Middle East. And it revolves only around Israel.

This is European hypocrisy of the highest order. It is sickening in its scope and magnitude. And it is time for it to stop.

As the continent where more Jewish blood was spilled over the past 2,000 years than any other, Europe has a special responsibility and a moral obligation to support Israel.

They have an eternal debt to pay to the Jewish people for the slaughters, massacres, blood libels, anti-Semitism, forced conversions, expulsions, Crusades and Inquisitions which they inflicted upon our ancestors for two millennia.

All of this might sound like ancient history to Mogherini and her colleagues, who probably don’t see what it has to do with compelling Israel to create a Palestinian state. So just in case, let’s highlight a more recent example of European hypocrisy, one that is closer to home and can be found in Europe’s own back yard: Catalonia.

This past Sunday, millions of men and women across the northeastern Spanish region made an historic cry for liberty. Bravely defying heavy-handed threats and intimidation from Madrid, some two million Catalans took part in a referendum on independence, peacefully exercising their basic human right to decide on their own future.

And the results were decisive. Over 80 percent of voters backed Catalonia’s independence from Spain, prompting Catalan leader Artur Mas to declare that the ballot “made it very clear that we want to govern ourselves.”

“We deserve to vote in a legal and binding referendum,” Mas said, adding, “and this is what we are going to do.”

Curiously, however, the Catalonians’ roar for independence doesn’t seem to interest the rest of Europe as much as that of the Palestinians, even though the former have a much better case for having their own state.

To begin with, there actually once was a Catalonian state, albeit briefly, in the 17th century, whereas there has never been an independent Palestine in all of history. Even if one does think the Palestinians have been living under occupation since 1967, Spain has occupied Catalonia for 300 years, making it a longer-running dispute, and justice delayed is justice denied.

And whereas Catalans can legitimately claim to be a nation with their own distinct language and culture, the Palestinian Arabs cannot.

Nonetheless, this doesn’t appear to bother Europe one whit, as it completely ignores the Catalan case for statehood while championing that of the Palestinians.

Adding to the irony is that the Spanish parliament in Madrid – the same one that will not countenance freedom for Catalonia – is set to vote on recognizing “Palestine” as an independent country.

This only goes to prove that when it comes to Israel, Spain’s policy amounts to “do as we say, not as we do.”

I’d like to think that the new European push to recognize a Palestinian state stems from naiveté, from some misguided belief that doing so will somehow dull the threat posed by Islamic extremism. Or that perhaps they are simply wallowing in ignorance and truly believe the Palestinians to be the aggrieved party in the conflict with Israel.

But I know better – and I hope you do as well. The hypocrisy is so egregious and so blatant that it cannot and must not be ignored.

Sadly, what we are witnessing now is little more than a continuation of Europe’s mistreatment of the Jews, but with a new twist. After all, for 2,000 years, Europeans told the Jews to leave and “go to Israel.” Now that we are finally here they want us to abandon it and hand it over to our foes.

And yet when it comes to a long-running dispute in the heart of Europe, they don’t even think of suggesting a division of Barcelona or the creation of a Catalonian state living side-by-side with Spain in peace and security.

So perhaps it is time for someone to pull Mogherini aside and politely whisper into her ear: before you start offering unsolicited advice to Israel, you might want to get your own hypocritical house in order.
a 11:43